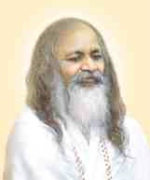 Maharishi Mahesh Yogi
Image courtesy of
Maharishi-India
The first time I remember having heard of Maharishi was during the 60's. All of a sudden he appeared on the News together with the Beatles. From then on, Maharishi was part of the revolution that soon span the globe. Everything was changing and the growing interest in Meditation, Yoga, and Eastern Philosophy was proof that some changes were entirely positive. During that time Maharishi traveled extensively, holding very interesting and intellectually challenging lectures, introducing an ancient system of Transcendental Meditation (TM) to the West.

My second memory of Maharshi was to see him in person giving one of his lectures at a University in Cologne. He sat down cross-legged on a table covered with white cloth, holding flowers. Wherever he went he was seen holding flowers - sometimes I wondered whether this had any influence on the famous Hippie Flower movement.

Maharishi was born in India in 1918. His Guru was Swami Brahmananda Saraswati who was appointed to the high post of Shankaracharya. Maharishi stayed with his Guru for thirteen years before he started his public lectures. From there on people who were practicing TM grew in leaps and bounds. Today there are millions who have been introduced to the simple system of mentally repeating a given Mantram, which is taught by an estimated 40000 teachers worldwide. TM's many positive effects on health and the nervous system have been repeatedly verified (see Meditation and Brain Function).

Sasha A. Ruzicka, a long-time teacher of TM, describes Transcendental Meditation as follows:
"Maharishi's Transcendental Meditation is a simple, natural, effortless procedure whereby the mind easily and naturally arrives at the source of all thought, the settled state of mind - Transcendental Consciousness or Pure Consciousness, Self-referring Consciousness - which is the source of all creative processes. This process can be likened to a river which naturally and effortlessly flows into the ocean and gains the status of the ocean. TM is practiced for 20 min. in the morning and evening, while sitting comfortably with the eyes closed."

"My easy system of Transcendental Meditation is a desired means to spiritualize the modern materialism and materialize the old spirituality."
- Maharishi Mahesh Yogi